The selection of instruments requires a high knowledge of our process and operating conditions, infrastructure and power supply, etc ... as well as understanding the different characteristics of a specific instrument.

This article describes the static and dynamic characteristics of instruments in general. It allows you to understand the difference between the different concepts related to the specification of an instrument, online analyzer or sensor.

Knowing the meaning of each of these parameters or characteristics allows us to compare the performance of different instruments when we want to select one of them to perform a certain function.

Accuracy indicates how close the measurement is to the true results.

The Precision indicates how close the measurement is to the repeatability or reproducibility values.

Precision defines the limits of possible errors due to the instrument operating at design conditions.

It is possible to find PDS that do not define precision but do define repeatability and reproducibility. 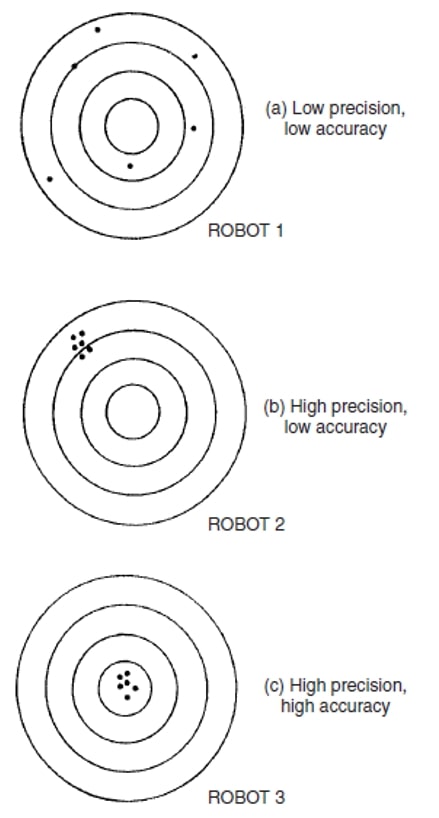 If we take note of the value of the different shots on the target in the image we will obtain the following Gaussian bell:

The smaller the distance of the mean value of the normal distribution from the true value, the more accurate the instrument will be.

The smaller the dispersion of the measurements, the more precise the instrument will be.

The term precision is used to describe the degree of freedom of a measuring system from random errors.

Some manufacturers express a percentage of inaccuracy (error)a function of :

Different factors may be added in the calculation of the final accuracy.

The terms repeatability and reproducibility are ways of expressing accuracy in specific contexts.


The repeatability of an instrument is the ability to reproduce the same results by repeatedly measuring identical values under the same operating conditions (P, T, Humidity, etc.), same direction of variation and over a defined period of time.


The reproducibility (or stability) of an instrument is the ability to repeat the same results when the measurement is made under different operating conditions (P, T, Humidity, etc.), over long periods of time between different measurements.

The Range represents the set of values of the measured variable that fall within the upper and lower limits of the instrument's measurement capability. It is expressed with two limits (lower and upper).

The algebraic difference between the upper and lower values of an instrument's range is known as Span. The Span is expressed as a single value.

La rangeability (turndown o rangedown) is one of the most important characteristics of an instrument, it is defined as the ratio between the maximum allowed span with respect to the minimum possible span for a given instrument.

For example, suppose we have a pressure transmitter that has a maximum span of 0 to 55.2 bar and a rangedown of 20 to 1. This means that a technician could set the span somewhere between 55.2 and 2.76 bar.

This information is important for selecting the right transmitter for each application, as the probability of finding a transmitter with the required span is very low.

The turndown tells us about the instrument's ability to adjust its span. The higher the turndown, the lower the sensitivity to low span.


A span offset error due to poor calibration causes the slope of the function to vary.

This error affects unevenly at different values or points across the range of the instrument.

Linearity is defined as the closeness of the instrument output curve to a straight line. It is usually measured as no-linearity and expressed as linearity, i.e. maximum deviation between the mean curve and the straight line. 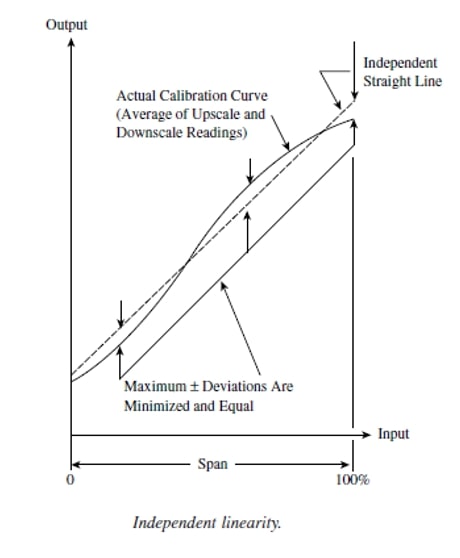 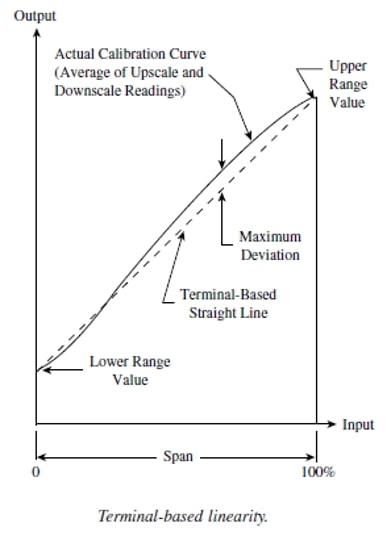 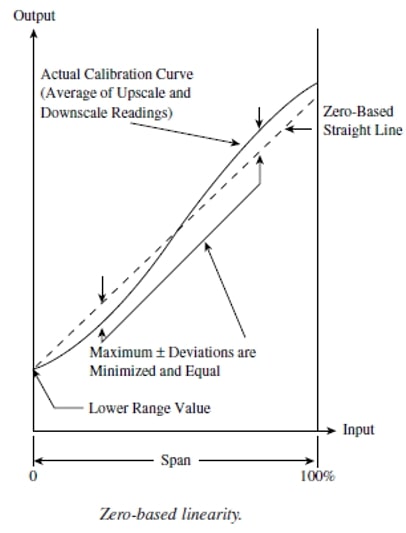 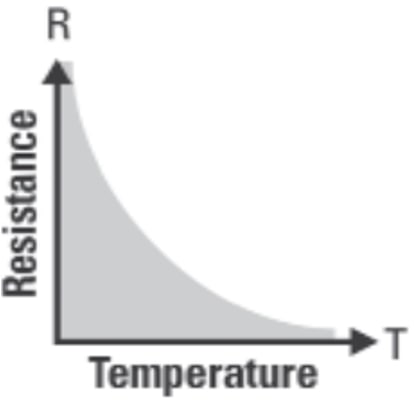 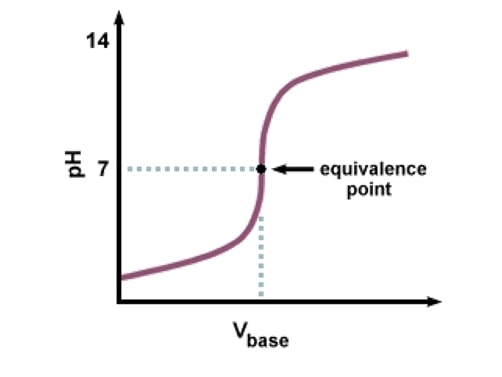 A non-linear relationship is any relationship that does not comply with the above, e.g. inverse, quadratic, exponential. It may affect the nature of the measurement (pH) or the transducer (thermistor).

The sensitivity of a measurement corresponds to the slope of the straight line. It is the ratio between the increase of the instrument output magnitude with respect to a change in the input (measured variable) after having reached the steady state.


All calibrations / specifications of an instrument are only valid under certain conditions of temperature, pressure etc.

Within our instrument the definition of sensitivity corresponds to the static gain of the sensor.


It is expressed as the ratio with the units of measurement of the two magnitudes, as we have seen this ratio must be constant throughout the range in a linear instrument, for example the iron-constantan thermocouple has a sensitivity at 0oC of 0.05mV/oC; a pressure transmitter has a sensitivity of 0.01159mA/mbar.

Many components of an instrument are affected by fluctuations in the environment, such as temperature. 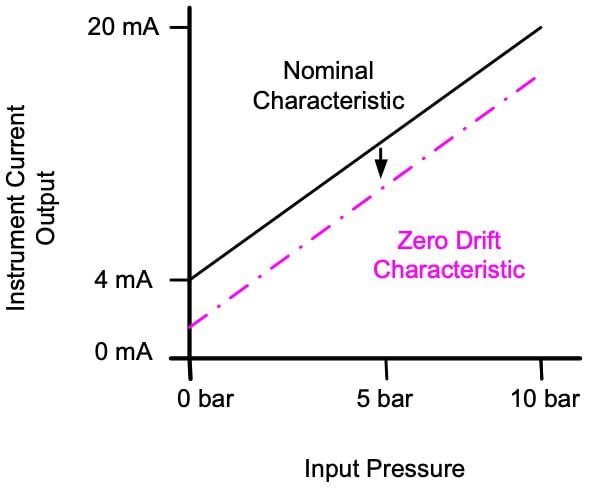 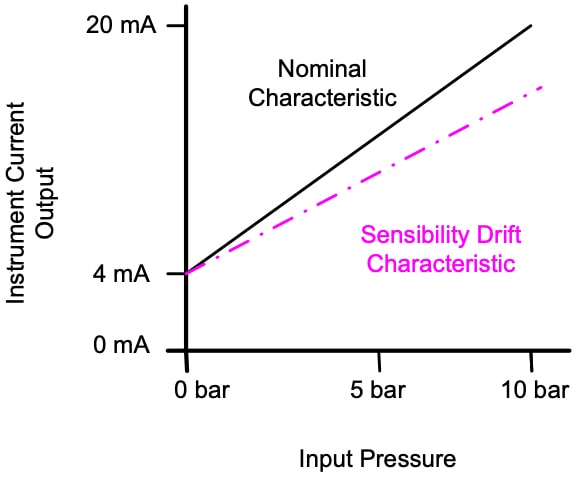 The following figure illustrates the characteristic output of an instrument with hysteresis.


If the measured quantity is increased uniformly from a negative value, the instrument output shows a response similar to the A-curve.


If the measured quantity is then decremented in a uniform way, the output of the instrument shows a response similar to curve B.

The non-coincidence between these two curves (A,B) is called hysteresis.

Instruments that do not undergo a certain hysteresis can have a dead band, very typical in instruments where there are gear sets. It is related to the dynamic parameter 'Dead time'. 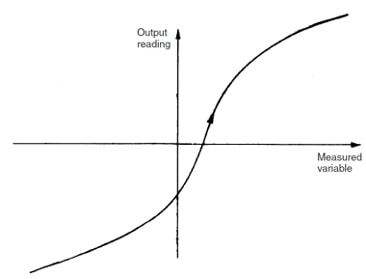 The difference between hysteresis and dead band is that hysteresis always generates a change in the output of the instrument.

The dynamic response of an instrument is characterized by its natural frequency, frequency response, phase shift, linearity and distortions, rise and settling times, response speed...

It will depend on:


The dynamic response can be linear or nonlinear. Fortunately most instruments show linear characteristics reducing to a simple model using differential equations.


In a linear system we can establish the following differential equation between input and output for a time > 0.


Where : qi is the measured quantity, q0 is the output of the instrument and a0..an,b0..bn are constants.

Simplifying and taking into consideration that the variations of the measured variable are gradual (small increments), we can reduce the differential equation to the following expression :


We can establish three types of responses:


If all coefficients a1..an are 0 except a0, then the equation becomes : where K is a constant corresponding to the previously defined sensitivity of the instrument.


Any instrument that behaves according to this equation is called a zero-order instrument.

They are rare instruments, they are not dependent on the input frequency.

An example of this type of instrument can be the resistance measurement of a potentiometer.


All the instruments behave as a 0-order instrument in the face of small variations in the measured variable. 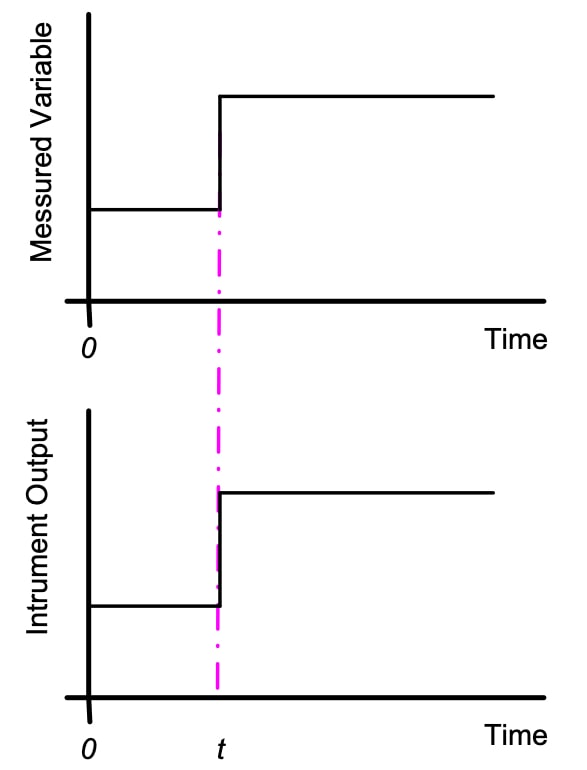 
If all s coefficients a2..an are 0 except a0 and a1, then the equation becomes :


Which corresponds to a 1st order differential equation, substituting d/dt for the operator D and solving for q0 we have :

Defining K=b0/a0 as static sensitivity and Tau =a1/a0 as the time constant of the instrument the equation becomes :


These instruments have a delay in their response, the Tau constant is a measure of the delay.

A large number of instruments have a first order time response, this is important in process control because of the time delay that occurs between the measurement of the quantity and the output of the instrument.

It is common to find both parameters (dead time and response time) grouped together as Total Response Time.

The instrument constants can be determined analytically:


Which corresponds to a 2nd order differential equation, substituting d/dt for the operator D and solving for q0 we have :


Where w is the natural frequency and ep is the damping factor, these values depend on the physical parameters of the equipment, such as the mass and physical dimensions of the sensor.

The shape of the response to a change in measurement depends strongly on the damping factor (epsilon).

The response of this type of instrument is of the stable oscillating type: 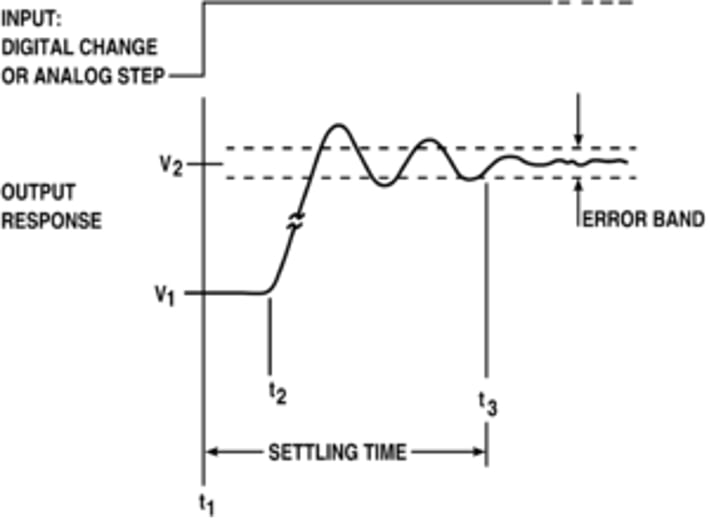 The instrument responds by oscillating to small variations in the measurement (physical/chemical measurement).

The oscillations are reducing in amplitude and after a transient period, they are completely reduced and the process reaches a new stable equilibrium.

Solving the equation analytically, we observe that the shape of the response depends on the damping factor.

A typical example is the accelerometer where e is usually defined between 0.6 and 0.8. 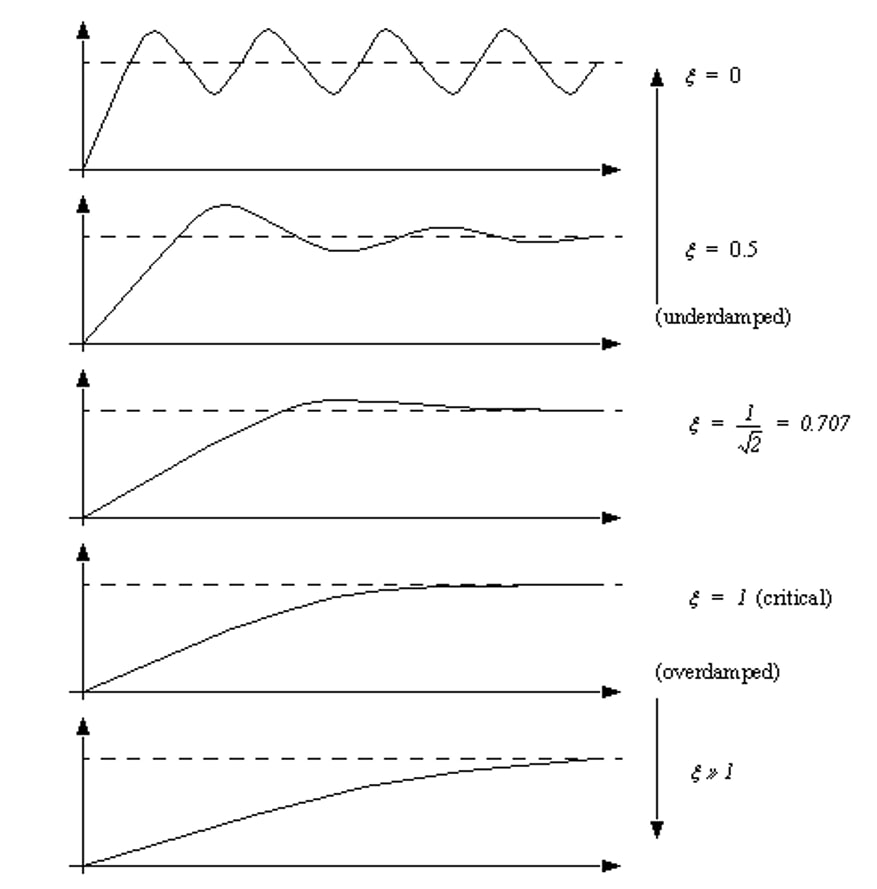 These instruments can oscillate and even be unstable within limits. This means that this type of instrument needs a stabilization time to determine the output.

It is defined as the time required for an instrument to respond to a change in the input signal by at least 90% of the expected value. This time is affected by factors such as :

In the case of automatic systems, response time can be a limiting factor due to the maximum number of readings that can be taken per second.

When the remote level indicator on a tank reads 90% of its capacity, can you be sure the tank is not overflowing?


Continuous calibration allows us to ensure that an instrument maintains the specification required by the installation, this must be done periodically.


The calibration of an instrument may change due to zero drift, span drift, or both.

The frequency of calibration depends on the importance of the measurement in the process.


To be valid and acceptable all calibrations must be traceable to a national standard.

All calibrations must be performed in such a way that they can be checked against a national or international standard ( QAL1 ).


Traceability is achieved by ensuring that the standard elements used are routinely calibrated with a superior reference standard. These instruments are known as standards. They are periodically sent to a standards laboratory to be calibrated with higher accuracy laboratory equipment.

Laboratory standards are periodically calibrated with a higher reference standard.

They are supposed to maintain their accuracy for a long time because they suffer little deterioration, but this does not exempt them from periodic calibration. 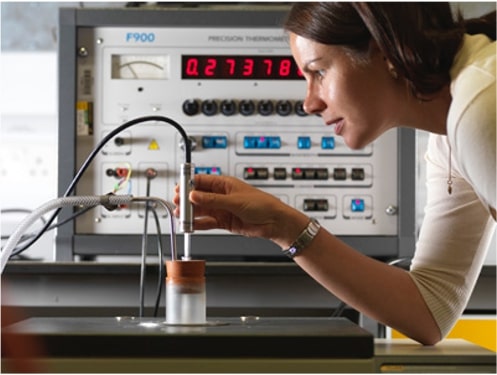 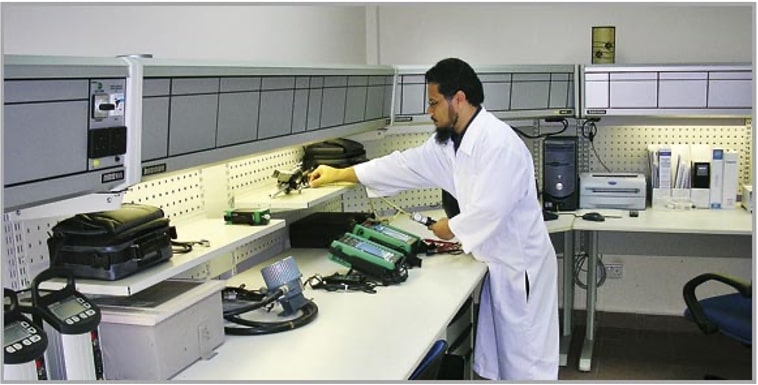