Process control is today a fundamental part of the production process. Through process control we are able to produce our products in line with our quality, cost, environment and safety standards.

In the second part of the article we talk about the mythical current loop and the reasons why it is still a valid and current means of communication.

The article ends with a small reference to instrument calibration.

Download your free PDF file about introduction to instrumentation!

Measurement and control constitute the brain and nervous system of any modern plant.

Control systems are a fundamental part of industry and automation. They are a set of mechanical, electrical and electronic equipment used to enhance production, efficiency and safety.Typically, control systems are based on control loops.

The measurement and control system monitors and regulates processes that would otherwise be difficult to operate while maintaining quality, cost and safety requirements.

The control systems must achieve the following objectives:

Process control is necessary in modern industry for:

An open loop system is a type of control where the output of the system depends only on the input. These systems have no feedback.

In open loop, the system does not compare the measured variable with the desired value (set point). It is a system in which there is no measuring instrument.

It is a simple system and is affected by disturbances.

In closed loop, the system does compare the measured variable with the desired value (set point). It is a much more complex system than the open loop and is less affected by disturbances.

Finally, a method of acting or influencing the measured variable (MV) is needed.

This picture shows a system consisting of a tank with an inlet liquid flow Qin, and an outlet flow Qout.

The liquid in the tank has a height or level equal to h. The formula for Qout is Qout = K*√(h), since the flow rate out of the tank depends on the height of the liquid h (Torricelli's Theorem).

There is a value of h at which Qout is equal to Qin -at this point we say that the level is self-regulating.

Looking at the tank in the image above and taking into account the following data:

At what liquid height will the tank be self-regulating?

We have said that a method of acting or influencing the measured variable (MV) was necessary.

If we assign a person to control the level (height) of the tank, he/she can adjust the height by opening and closing the outlet valve that regulates the flow Qout, so that the level can be regulated.

The controlled variable is still the level (SP), but now the height of the tank depends on an action manipulated by a person (MV) (MANUAL CLOSED LOOP).

Why does the tank level fluctuate?

Do you consider it stable enough as a variable of a chemical process?

If we replace the person with an automatic system (AUTOMATIC CLOSED LOOP) we can obtain a more precise control of the level.

The height of the liquid level in the tank is measured by a sensor (mechanical or electronic) and a controller calculates the difference between the measured value (PV) and the set point (SP) and generates a signal to the actuator to open and close the flow controlled outlet valve Qout (MV).

From what has been explained so far, a feedback control system seems to have at least 3 basic elements:

How do we select the sensor position?

The position and type of sensor will depend on the loop we want to control, usually the position of the sensor is located near the influence of the output of the control system, so the control action can vary a measure and this measure can be used as feedback information.

What is a typical final element for a chemical process?

Typical end elements are usually valves. These can be control valves or ON/ OFF valves. Frequency inverters or other electrical, pneumatic or hydraulic devices can also be used.

What about the typical sensor?

Pressure is the ultimate measurement. With a pressure measurement it is possible to calculate the level, the flow rate and the pressure itself.

The following diagram shows the elements of a closed loop: 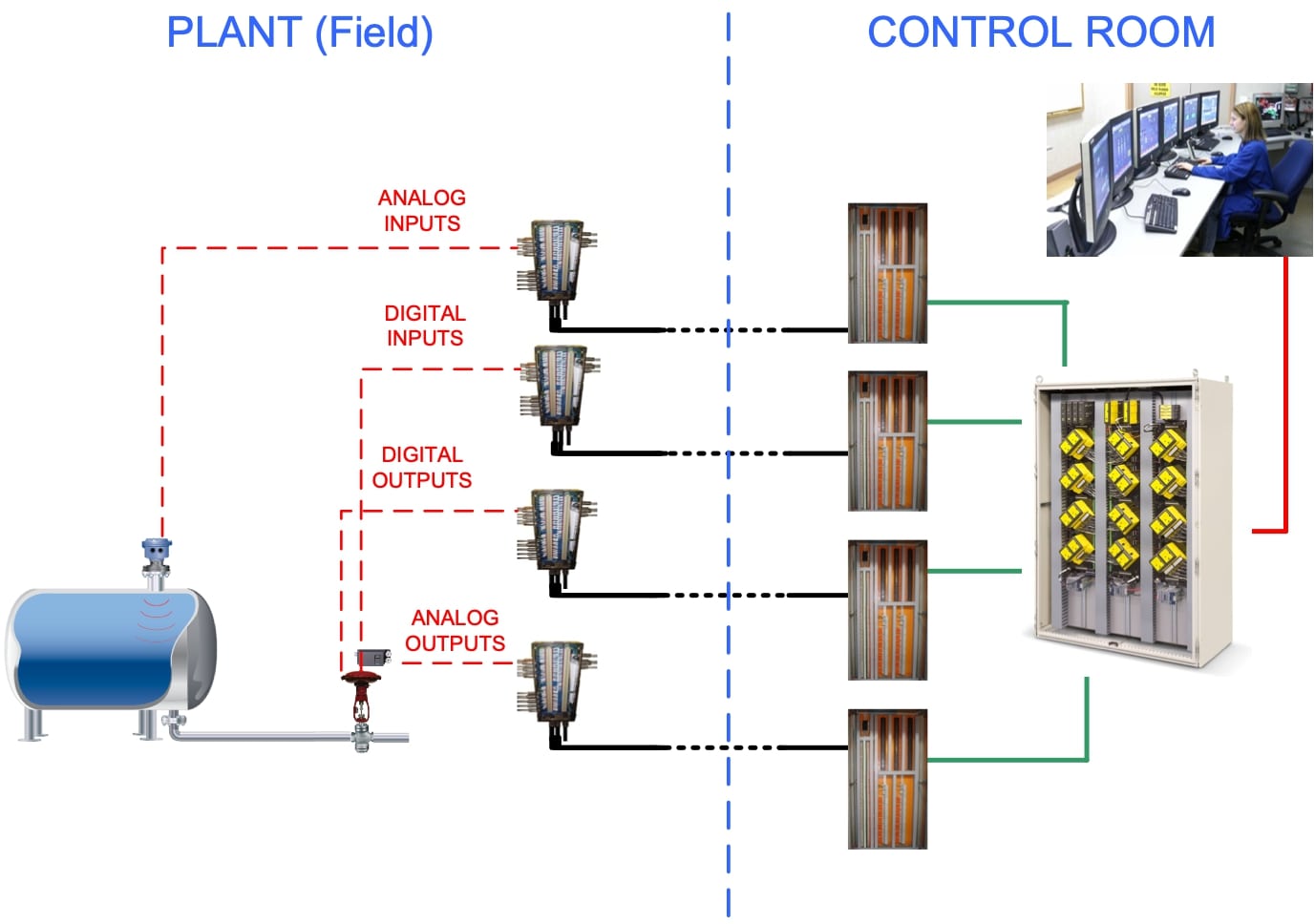 Prior to 1960, instrumentation in the process industries used pneumatic (pressurized air) signals to transmit measurement and control information almost exclusively.

These devices make use of mechanical force balance based elements to generate signals in the range of 3 to 15 p.s.i. as an industrial standard.

Since 1960, electronic instrumentation has become widespread (4 to 20 mA).

The transmitter converts the sensor output signal to a signal suitable for the controller input (4..20mA).

They are normally designed to act in direct action.

Although, as we have said, electronic instrumentation has spread, analogue instrumentation is still predominant, so we consider it interesting to dedicate a section to describe how it works.

The purpose of a current loop is to transmit the signal from the analogue sensor over a certain distance in the form of a current signal, up to 3 kilometres.