How to calculate the Restriction Orifice Size?

This calculator let you calculate the restriction orifice size based on pressure drop and flow rate.

The flow measurement using an orifice plate is based on the application of energy conservation to a flow, measuring the difference in pressure between two points (P1 and P2), at this points the flow has different speeds. This speed change is caused by a reduction in area. The orifice plate installed in the pipeline causes an increase in flow velocity and a corresponding decrease in pressure.

Orifice plates are still the most widely used type of flowmeter in the world today.

Below you have our Restriction Orifice Pressure Drop Calculator. We have prepared a customized document with your own data, so you can do your calculations and then free download them for your own purposes.

A fluid is a set of particles that are held together by weak cohesive forces and the walls of a container; The term encompasses liquids and gases.

State of the matter. It could be Liquid, Gas or Steam.

Mass of a substance which passes per unit of time. Mass flow in Kg/s units, flowing through the pipe.

Considering the direction of the fluid, we define P1 as the pressure (gauge or absolut) existing in the pipeline before the restriction orifice.

Pressure has two effects on volume. The higher pressure makes the gas denser so less volume flows through the meter. However, when the volume is expanded to base pressure, the volume is increased.

Viscosity is the measure of a fluid's resistance to flow. Dynamic viscosity is a measure of internal resistance.It measures the tangential force per unit area required to move one horizontal plane with respect to an other plane.

It is commonly expressed, particularly in ASTM standards, as centipoise (cP) since the latter is equal to the SI multiple millipascal seconds (mPaÂ·s).The viscosity of a fluid is highly temperature dependent.

Wet steam is a mixture of steam and liquid water. It exists at a saturation temperature containing more than 5% water. It is said to be a two-phase mix: steam contains droplets of water that have not changed phase. % in volume of water present in steam.

They are used more frequently because it is one of the simplest configurations and it is not necessary to drill the pipe. The high pressure outlet (H) is located 1 inch (25.4 mm) before the plate and the low pressure (L) 1 inch (25.4 mm) after the plate. With a tolerance of 0.5 mm when Beta larger than 0.6 and D less than 150 mm and 1 mm in other cases. They cannot be used for pipe size of less than 35 mm diameter. Since the venacontracta may be closer than 25 mm from the orifice plate.

In this case the pressure taps are made directly at the edge of the plate by piercing the flange through independent holes made with a small inclination. These taps are similar in many respects to flange taps, except that the pressure is measured at the â€˜Cornerâ€™ between the orifice plate and the pipe wall. Can be used for diameters of less than 50 mm. The diameter of the holes a must be between 0.005 D and 0.03 D for Beta less than 0.65, and between 0.1 D and 0.02 D for Beta greater than 0.65.

As a rule of thumb Corner tappings are recommended for sizes up to 1 1â„2â€, Flange tappings from 2" to 16" and Radius tappings for higher sizes.

Size of the purge orifice in mm. The bleed hole is required in gas flow services where we can have trapped liquid. Bleed hole is not recommended in dirty fluid service or slurries as the hole could be plugged.

Linear Expansion Coefficient for Plate (alphaplate) and for Pipe (alphapipe)

Ambient temperature is the air temperature of any object or environment where equipment is stored. The adjective ambient means "relating to the immediate surroundings." Also sometimes referred to as the ordinary temperature or the baseline temperature, this value is important for system design and thermal analysis.

In this cell you can tell us how the orifice plate regarding pipe is installed it can be installed horizontal or vertical. 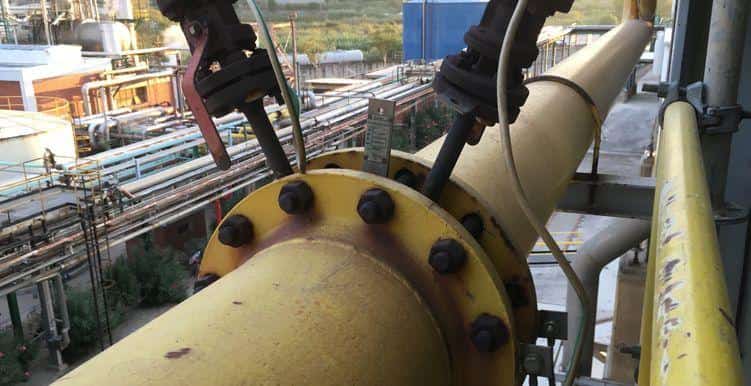 Internal pipe diameter in mm. It has in consideration the thermal expansion of the pipe.

Pressure Ratio at which the discarge coefficient determined has the value C.

Pressure Drop Ratio (PDR=DP/P1) let you know the need to use compressible equations. For PDR less than 0.2 the change in gas density is small, and the assumption of incompressible flow can me made. For PDR greater than 0.4, the density change is large and compressible flow should be assumed.

The Reynolds number (Re) is an important dimensionless quantity in fluid mechanics used to help predict flow patterns in different fluid flow situations. It is defined as :

...where rho is density, V is velocity of fluid in pipe, D is pipe diameter and mu is dynamic viscosity.

At low Reynolds numbers, flows tend to be dominated by laminar (sheet-like) flow, while at high Reynolds numbers turbulence results from differences in the fluid's speed and direction, which may sometimes intersect or even move counter to the overall direction of the flow.


There are in general three types of fluid flow in pipes

Error obtained in the calculation of the final Beta Ratio (Beta) with respect to the Estimated Beta (Beta0).

Inside diameter of the orifice plate at fluid's temperature.

Inside diameter of the orifice plate at ambient temperature.

Another calculators or articles that may interest you:

If you have any question regarding this calculator, please don't hesitate to get in touch ... Anyway you can have a look at our frequently asked questions page, there you will find a solution to the most common questions.

x
We use cookies to offer you a better browsing experience, analyze site traffic, personalize content, and serve targeted advertisements. Read about how we use cookies More info. If you continue to use this site, you accept to our use of cookies.ACCEPT